A National Lottery-funded project in her hometown of Burnham-on-Crouch, Essex, helped Angela get her sparkle back. Here’s her story:

I had always been a strong, independent, confident person, successful in my career up to retirement, but events in recent years turned me into someone who had become scared of my own shadow. I could only describe it like walking out into the sea and being knocked over by a huge wave coming in, and then before finding my feet again, another wave came, and then another, making it impossible to stand firm.

"In 2013 my husband passed away suddenly. I became fearful of living in my house alone. My beloved grandson, then aged 19, was killed in a car accident at just 20."

In 2013 my husband passed away suddenly. I thought I coped very well with this and took comfort from the fact that his death was sudden and painless. The only really negative reaction I felt was that I became fearful of living in my house alone.

My beloved grandson, then aged 19, began visiting me almost daily to offer support. Then came the dreadful blow, when he himself was killed in a car accident at just 20; a few other traumas came my way, including loss of sight in one eye and being knocked down by a car.

I constantly felt “unwell” physically and mentally but put it all down to a reaction to bereavements and traumas, which had to be gone through.

I began making myself go on day-long coach trips because I had begun to feel anxious on public transport. I also volunteered to help look after my town’s local flowerbeds to keep myself busy and mix with people more. However, by October 2016 I realised I was not recovering as well as I thought I should.

I referred myself to the NHS Improving Access to Psychological Therapies (IAPT) service, which offers “talking therapies”. I was subsequently diagnosed with severe depression and very severe anxiety, which came as a big shock to me. I didn’t fit in with my pre-conceived idea of someone severely depressed: not eating properly, not taking care of their home or their personal hygiene and appearance. I was taking care of all these issues very well. I began a course of six cognitive behavioural treatments.

In January this year, I saw an advertisement for Create and Flourish’s art workshops. I hadn’t heard of this organisation before so I phoned them to see if they had a space I could take up. They did. When I arrived for my first workshop, which was collography printing, Sharon told me about the organisation, and their aims. I had no idea of the connection to mental health issues, and this reinforced my belief that I had done the right thing in joining these workshops.

I have taken part in every creative workshop since I made that initial phone call. Apart from rekindling my love of art dating back to the 1960s, I have enjoyed creating things in many areas of “art” – printing, drawing, painting, photography. I love being absorbed in creating, which I could do at home, but I have benefitted hugely from taking part in a group and away from home.

"I feel a great sense of achievement: I have a lovely folder of all the works of art I have created, and I have made new friends."

My mind is completely taken away from my day-to-day worries and anxieties, not only because of the art but because of the social aspect of these workshops. It is nice to share a cup of tea and biscuits with like-minded people at the end of each workshop.

I feel a great sense of achievement: I have a lovely folder of all the works of art I have created, and I have made new friends.

Create and Flourish played a big part in my recovery (and will continue to do so). It was only when I began feeling much better that I realised just how awful I had felt.

I am grateful to National Lottery players, for funding projects like Create and Flourish, which has helped me pull myself back up after so many dark times. They certainly have changed my life! Angela sits in her home, with photos of her late husband and grandson Harvest Creative 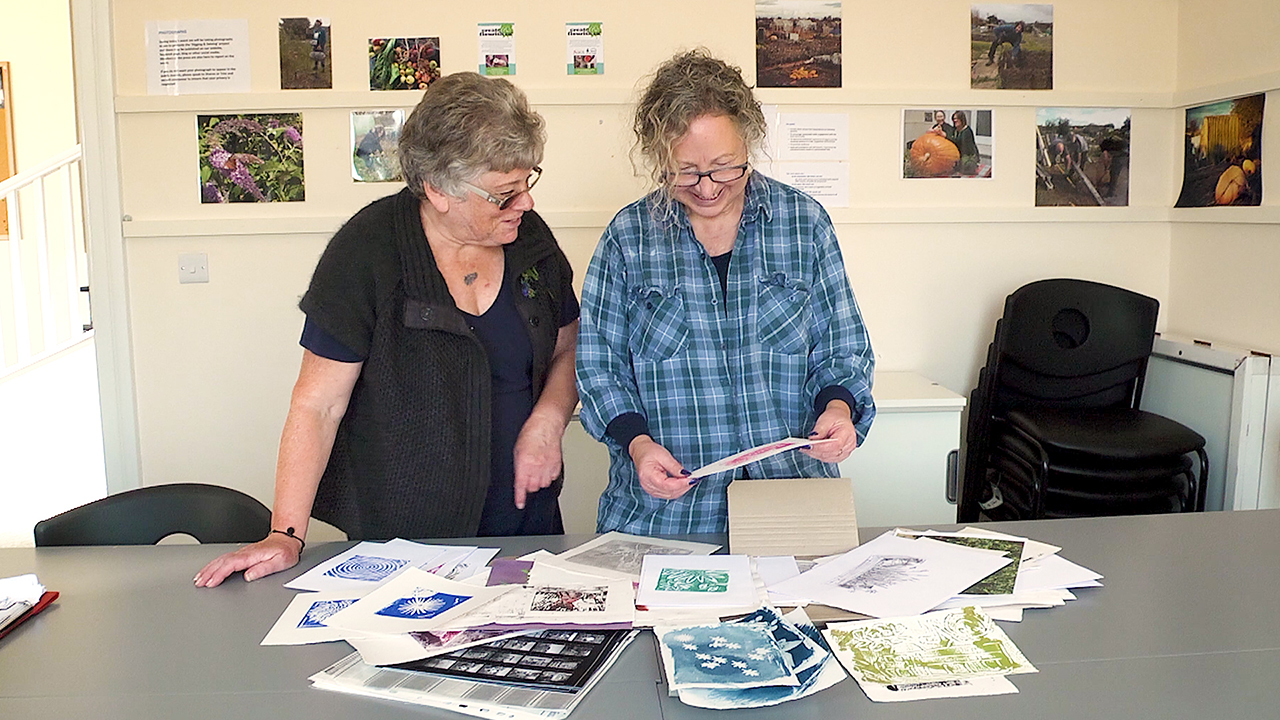 Angela and Triss on Create and Flourish's allotment Harvest Creative