A fascination for steam engines has been turned into a career opportunity for Hazel Pennack.

“I've always wanted to be an engineer and I have always been interested in steam engines. I've been around steam engines my whole life,” says Hazel, 34, who grew up in Harrow Weald and now lives in Gloucester. “My dad has built a 5inch gauge locomotive and holidays were always based around a steam railway. We'd also go to museums and heritage centres, which I loved.”

Her interest led her to a degree course in Engineering Design and Appropriate Technology at Warwick University. “I wasn't really aware at that time of any other options available such as an HND or an apprenticeship, so uni seemed the only option,” she says. In a following gap year she also spent time at the Kew Bridge Steam Museum, now the London Museum of Water & Steam.

Then she saw a stand advertising an apprenticeship with the BESTT while visiting the London Model Engineering Exhibition. “It seemed like an opportunity too good to miss. I was unemployed at the time,” she says.

“I loved the heritage aspect of my apprenticeship. I learned a lot and I also gained a lot in terms of self-confidence.”

Hazel was accepted onto the scheme and placed at Hatch Heritage and Steam Engineers in Swindon, qualifying as a boilersmith. “I loved the heritage aspect,” she says. “I learned a lot and I also gained a lot in terms of self-confidence.”

Having successfully completed her apprenticeship and while on the lookout for other job opportunities she is currently volunteering at Gloucester Waterways Museum as head engineer looking after their steam-powered bucket dredger. It is the oldest vessel of its type in Europe, and was restored a couple of years ago, also with the aid of an HLF grant.

A further ambition is to own a steam engine of her own. “I’d love to have an Advance steam roller or a 4/4.5inch scale traction engine,” she laughs. 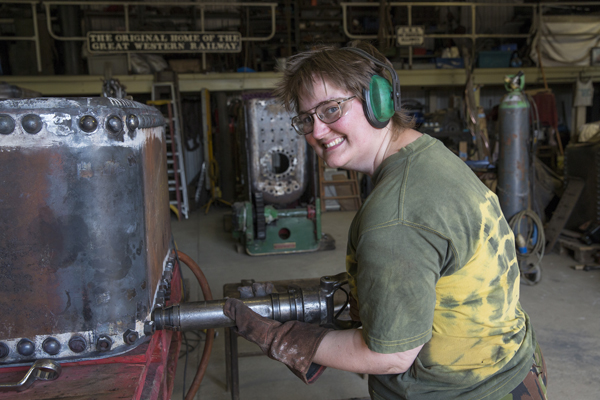