Let the celebrations begin: The National Lottery is 25

Let the celebrations begin: The National Lottery is 25 Today marks the beginning of six weeks of celebrations for The National Lottery’s 25th Birthday.

To kick things off, a new piece of modern art by world-renowned artist, David Mach RA, is being unveiled in an unlikely setting.

Mach's composition, United By Numbers: The National Lottery at 25, is being exhibited for one day in the window of Booth & Howarth on Mauldeth Road, Manchester. The newsagent has been selling National Lottery tickets for 25 years.

The artwork features a mix of famous and lesser-known national treasures including people, places, projects and icons that have been part of extraordinary things made possible by The National Lottery.

From the Morecambe Brass Band, one of the first projects to ever receive National Lottery funding, to Betty Webb, a Second World War codebreaker from Bletchley Park, the impressive lineup is set against a backdrop of National Lottery-funded venues including Jodrell Bank and Giant’s Causeway, composed in David Mach’s signature collage style.

All of these individuals and places have one thing in common: they have all been positively impacted by The National Lottery over the past 25 years.

Betty Webb said: “It’s a privilege to be part of this special celebration and appear in this wonderful image. Bletchley Park is a key part of our heritage, and The National Lottery has helped tremendously in ensuring it can be enjoyed for future generations.”

Reflecting on the inspiration for his new piece, David Mach said: “For the past 25 years, there is barely a part of our cultural, sporting and community life that has not been positively influenced by National Lottery funding.

"I wanted to help people to get a sense of this impact with this artwork through 25 stories, and to have it shown on a local high street for anyone to view is fitting.”

Key to the image: 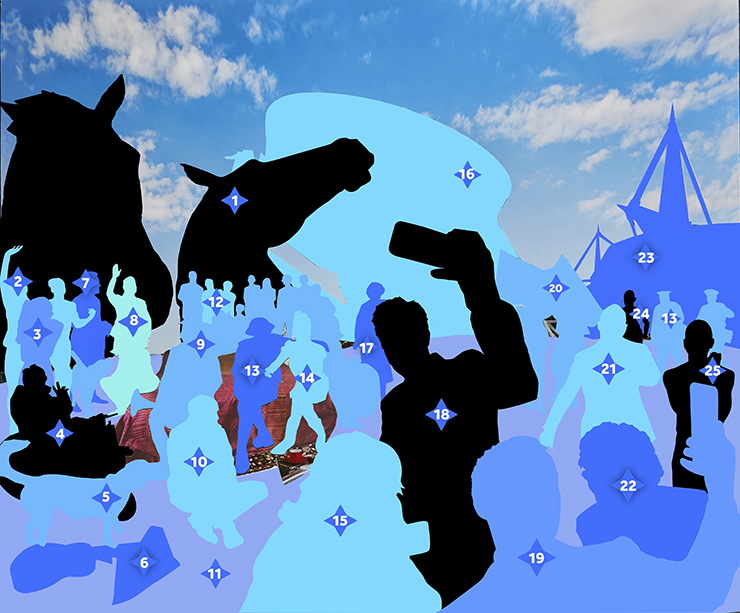 Over the next six weeks, until 6 December, The National Lottery will be unveiling a range of activities, including free events for the whole of the UK to enjoy.

Celebrate with us the incredible difference the National Lottery has made by taking a closer look at how £8bn of funding for heritage has changed people’s lives and made communities better places to live. To celebrate The National Lottery’s 25th Birthday, three very different groups in Waltham Forest share their stories of how its investment has transformed a place they all love.