To mark Halloween, a list of the UK’s most haunted heritage sites has been compiled by one of the country’s leading team of ghost hunters. Visit if you dare!

Spectrum Paranormal Investigations have teamed up with The National Lottery to highlight their top 10 historic venues where you can experience ghostly goings-on.

Eilish McGuinness, Executive Director of The National Lottery Heritage Fund, said: “After 25 years funding tens of thousands of historic sites around the UK - some of which date back many hundreds of years - it’s perhaps no surprise that a few of them have spooky tales to tell.

"What better time than Halloween to see some of our amazing heritage, much of which has been transformed thanks to money from The National Lottery.”

"On stormy evenings, an apparition of a Victorian girl wrapped in a shawl has been seen carrying a baby in one hand and a flickering lantern in the other." This Grade I listed Jacobean house is home to several spirits — from Dick the houseboy who hanged himself after being accused of stealing, to the former housekeeper who appears sitting in a chair wearing a distinctive green dress. But most famous is the grey ghost, believed to be Mary Holte, a daughter of the house who was locked up by her father for 16 years after she tried to elope. Halloween events are taking place on 31 October and 16 November.

The park and mansion are said to be occupied by ghosts and the presence of many who have passed through over the years, including school children and soldiers.

The park is believed to be haunted by a devilish dog or ‘ganesh’, legendary portent of death for anyone who looks into its eyes.

The Tudor Manor house has been named in the top ten haunted locations in the UK, and hosts regular ghost tours and ghost watches. Four resident ghosts are said to be: Colonel Prichard, a former lord of the manor and disillusioned ally of King Charles I, who has been spotted drawing up battle plans; Mattie, a former maid who burned to death in an accident; a boy who fell to his death; and a man in black, a presumed murderer who patrols the perimeter of the house. Ghost tours and Halloween activities take place from 18-31 October.

Terrifying tales revolve around Tom Fool, a notoriously cruel court jester who lived at Muncaster Castle during the 16th century. Events include Monster cabaret, scary maze, potion making and witches in the castle. Tales from the Graveyard starts from the Ghostly Grotto at 5pm, 31 October – 2 November. 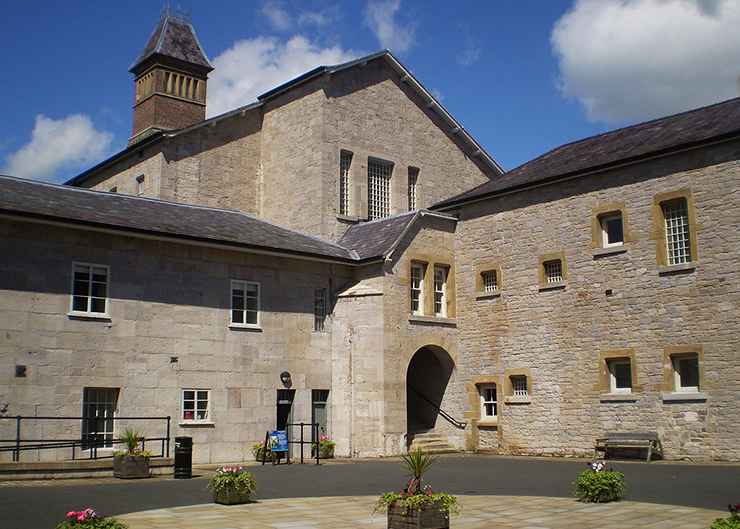 Once a prison, visitors can learn about the punishments that prisoners suffered. William Hughes, the last man to be hanged at Ruthin, is said to haunt the yards and structure. Halloween festivities run from 31 October – 1 November.

Murder and ghost legends are plentiful in public houses and buildings in the area. For example, the murder at the Neptune Public House reproduced from ‘Swanbourne – History of an Anglo-Saxon town’ by the late Ken Reading.

The most famous ghosts are The Black Lady – a 9th-century nun returned to avenge herself for being made homeless by the Barons of Marmion – and The White Lady, who threw herself from the tower after the death of her lover. Halloween Haunted Castle Week includes events and activities, 31 October – 1 November There have been multiple sightings of previous residents, from Thomas A. Beckett to Anne Boleyn, but the most active spirit is believed to be that of Arabella Stuart, whose ill-advised love life got her in serious trouble with both Elizabeth I and James I. “WWT Castle Espie is steeped in history, myth and legend. On stormy evenings, in the ancient woodlands on the edge of the Castle Espie reserve, an apparition of a Victorian girl wrapped in a shawl has been seen carrying a baby in one hand and a flickering lantern in the other. You can hear her crying out for help as her voice is carried by the wind.

“The story goes that the young girl was thrown out by her family, abandoned to the elements, and she wanders the woods, looking for shelter and warmth. However, when you approach her, she slips behind a tree and disappears.

“We are very grateful for National Lottery funding which has helped us ensure the stories associated with WWT Castle Espie continue to be accessible to visitors from far and wide.”

Find out more about the 25th Birthday celebrations.

Grade I listed Ordsall Hall, near Salford, is said to be haunted

The National Lottery has supported over 42,000 heritage projects UK-wide, but only a few are said to have supernatural residents… Are you brave enough to seek them out?

Beckenham Place Park in Lewisham is celebrating the completion of a major National Lottery-funded restoration.