Thanks to a £14.8million grant from The National Lottery Heritage Fund a major new cultural and heritage venue in Plymouth, The Box, is ready to open its doors.

The grant from The National Lottery Heritage Fund, one of the major supporters of the project, means the vast arts and heritage space will open in Plymouth’s city centre on 29 September. Thanks to the funding, three separate buildings have been extended, restored and combined to create The Box.

As well as creating a cultural destination in the heart of the city, The Box has generated hundreds of jobs whilst it’s been under construction and will have a long-lasting impact on the local economy and community.

"The Box is going to be a place where people can reconnect with each other, Plymouth’s history and its future."

What's in The Box?

The Box brings together more than two million objects from six nationally important collections, in a new and sustainable home. Residents and visitors will be able to engage with the history of the city through artworks, natural history, human history, film, photography and archives.

Nine permanent galleries and six temporary exhibition spaces will be available to explore, including:

The opening of The Box is also part of Mayflower 400, an international programme of commemorative events supported by The Fund to mark the anniversary of the English ship, The Mayflower’s voyage in 1620. The Box’s opening exhibition Mayflower 400: Legend and Legacy explores early English attempts to colonise America and considers the personal and cultural impact this had on both sides of the Atlantic. 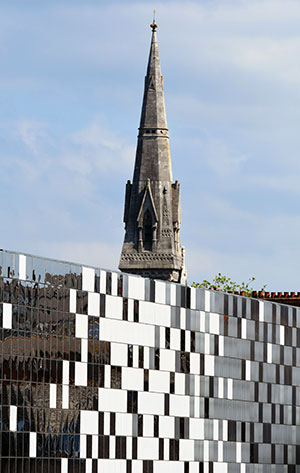 Paul Brookes, Interim CEO of The Box, said: “We are thrilled that we are now able to safely open to the public, having postponed our original opening date in May due to the coronavirus pandemic.

"The Box is going to be a place where people can reconnect with each other, Plymouth’s history and its future. We are hugely grateful to The National Lottery Heritage Fund for awarding such a significant amount of funding to The Box, helping to secure our vision to create a major new museum, gallery and archive for Plymouth and the wider region.”

"Thanks to money raised by National Lottery players, The Box will bring the stories of Plymouth to life."

Stuart McLeod, Director London & South at The National Lottery Heritage Fund, said: “This is an incredibly ambitious and exciting project that will create a new cultural hub in the heart of the city and invigorate the local economy.

"Thanks to money raised by National Lottery players, The Box will bring the stories of Plymouth to life through the new galleries and learning and research facilities. We are delighted that the local community and visitors will be able to explore the rich history of the city, from maritime heritage and natural history to fine art and film footage.”