Changing lives: from Lanarkshire to LA, no horror story for Jasmine

Changing lives: from Lanarkshire to LA, no horror story for Jasmine Two years after stepping into the world of film-making as a volunteer with National Lottery-supported project, 22-year-old Jasmine Chiswell has been able to catch a flight to the heart of Hollywood to live her dream.

Jasmine is just one of 10 people in the world to have been offered a scholarship with the New York Film Academy this year. As a result, she has now embarked on a Masters degree at their campus in Los Angeles, in the midst of Warner Bros and Universal Studios.

Her adventure began when studying a media course at Glasgow City College.  Jasmine had made a film as part of her course. An article about it in the local paper was spotted by the Pits, Ponies, People and Stories project who were looking out for volunteer film-makers.

“Learning from experienced people gave me loads of confidence."

“I was delighted when they approached me,” explains Jasmine. “It really caught my interest. I come from South Lanarkshire and am very interested in its history. I was amazed to find out that many children living in the region didn’t know where coal came from, even though they live in an area which once produced most of Scotland’s coal. I felt I had to get involved and realised that it would be an amazing opportunity to learn lots about filmmaking.”

Funded by the National Lottery, Pits, Ponies, People and Stories is a community learning and development project which is gathering and recording the wealth of knowledge, experience, stories and songs relating to South Lanarkshire's mining heritage. The project launched an exhibition, and has produced a variety of school projects and community films.

Jasmine learned the ropes on the first two films, soaking up skills and advice from the professional production companies involved. She started as a runner before moving on to sound.

“Learning from experienced people gave me loads of confidence. I’m naturally quite shy and was quite scared at first. They helped me find my feet and before long it felt really natural. I loved it,” said Jasmine.

She got the chance to write and produce the next film  - and then turned to her first love ‘horror’. Shaft 9 is a film about an imaginary cult that used to live in the mine. They left a curse in a box and years on, when two young miners found it, the consequences were disastrous.

"My experience, the communities, the children and all the people I worked with, helped me be my best."

She then went on to film a documentary about the project.

“Documenting the project was amazing fun. I worked with community groups and schools and felt like part of a family. We had such a laugh and learned so much about the heritage of the area through sharing local stories. The kids had great fun with all the old mining props too.

“I will never forget the day my films were shown to an audience on the big screen. It was as part of the Pits and Ponies Festival. Everyone was clapping and I had to wipe the tears from my eyes.”

During her time with the project, Jasmine was lucky enough to meet composer Patrick Doyle, who has written the score for the latest Cinderella movie as well as other films such as Harry Potter and Brave; and Iain Smith who was executive producer of the Mad Max films. Both were very encouraging about her work and suggested that she apply to the New York Film Academy.

“I had realised that film-making was what I wanted to do but didn’t think I was good enough. They gave me the confidence to apply. I sent off my Pits, Ponies, People and Stories films as the portfolio to my application and was utterly astounded to be offered a place. I can’t thank National Lottery players enough for what it has given me. The competition is so tough; you’ve got to be the best to stand out. My experience, the communities, the children and all the people I worked with, helped me be my best. I know now I am on the right path. It’s time for me to spread my wings and go for it.”

So next time you are watching a horror movie, come out from behind the cushion and take a close look at the credits. There might be a name you recognise! 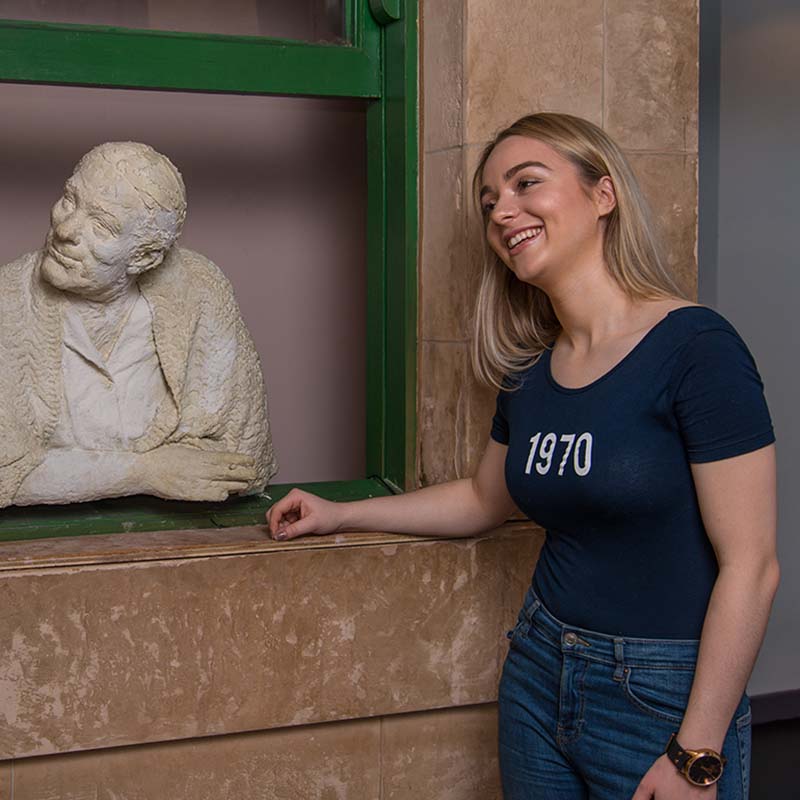 Jasmine at Low Parks Museum, South Lanarkshire, with the display of mining history