The 13-year-old is a member of Leeds Young Archaeologists’ Club (YAC), set up following a school history project delivered as part of HLF’s Parks for People regeneration of Middleton Park in Leeds.

Louise Martin, a leader at Leeds YAC who delivered the Middleton Park Schools History Project, nominated William for the national award, presented to young people who have made an outstanding contribution to archaeology.

William was one of over 100 children who took part in the Middleton Park Schools History Project, delivered to local primary schools in 2012.

"Miggy Park has been here for as long as I can remember, it isn’t just a park, it means something to me.”

Louise recalls seeing his face light up when she went into school to deliver the sessions. When Leeds YAC was set up on the back of this project, William was one of the first to get involved.

Thanks to National Lottery players, Louise was able to deliver the school project inspiring young people to become guardians of their heritage and explore the past through the archaeology of Middleton Park.

William went on to win the prestigious 2015 Marsh Award for Young Archaeologist of the Year, presented by the Council for British Archaeology and supported by the Marsh Christian Award.

HLF’s regeneration project in Middleton Park left a string of legacies for William, who thanks to National Lottery support and the support of Louise, YAC volunteers, and his family, can feel confident in discovering his future and following his passion for archaeology.

William plans to study archaeology and become a leader and volunteer at YAC… and never have a job behind a desk. William on an archaeological dig site at Middleton Park 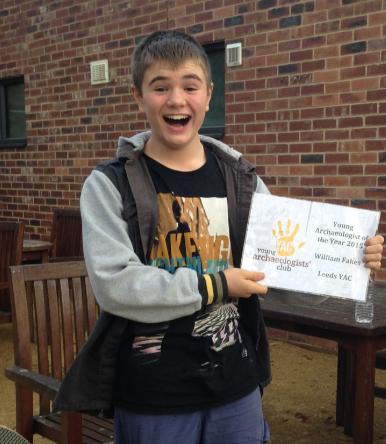 William was presented with his award in January at Middleton Park William celebrates becoming Young Archaeologist of the Year with his family William with Louise Martin, who nominated him for the award