What heritage means to me: Richard Graham MP

In the first of our new series, MP for Gloucester Richard Graham tells us about architecture and Aethelflaed in his guide to the city's heritage.

What’s the first thing that comes into your mind when you hear the word “heritage”?

Heritage is like honey. Take it little and often. The taste is enhanced if you know a bit about it - where it comes from and how its varieties are made. Honey has been part of life forever: we just need to keep making it, thinking of new ways to enjoy it, and continuing to treasure it. Just like heritage.

[quote]“Heritage is like honey. Take it little and often. The taste is enhanced if you know a bit about it - where it comes from and how its varieties are made.”[/quote]

All the streets and buildings and people with stories.

I like the less easy questions: where was Aethelflaed, Lady of the Mercians, buried? Was Civil War soldier Colonel Massey a hero or a turncoat? Were the remains of Llanthony Priory smashed up for the canal?

And always - what can we learn from the past that might help the future?

In Ecclesiastes are the rather gloomy lines that nothing is new - all has been done before.

But history rarely repeats itself exactly. What does happen is the constant human and architectural need for re-invention: warriors become business people, and industrial quays modern flats; one Victorian chapel is a care home, another a gym: and the Cathedral is for filming as well as prayer.

While we're at it, let's make an effigy of Henry III more interesting for today's generation by showing him in digitalised form, as if by magic. Technology revisits our story, shedding light on our past, present and future.

Why is Gloucester historically important?

It was the nearest crossing of the River Severn to Wales and so of strategic and trading importance. Gloucester was the third greatest city in England and we're still finding things that reflect that.

Anglican choral music, cricket, our great forests, a feast of great buildings large and small from yesteryear and a number of semi-mad happenings like cheese rolling.

My heart says James Graham, 1st Marquess of Montrose, the romantic Scotsman who won impossible victories for his king and ‘dared to put unto the touch to win or lose it all’ – he did lose it all, including his head.

[quote]“What can we learn from the past that might help the future?”[/quote]

But my head says Isambard Kingdom Brunel. In a lifetime of genius Brunel's Clifton Suspension Bridge, Temple Meads station and the line that snakes through our county all stand out as brilliant and beautiful engineering.

Do you have a favourite bit of parliamentary heritage?

The story of Westminster Hall and how it has evolved is the story of our nation – the ambitions of kings, the work of great craftsmen, the trials of great men, the bombs of the Second World War, and the new window to a great Queen. Look no further for our Island Story.

Which heritage highlights should visitors to Gloucester make sure to see?

Our shining jewel is the Cathedral. Inside look for Edward II, the medieval golfer in the East Window, the cloisters that Harry Potter and every film maker love and Thomas Denny's stained glass brilliance. And that's just the start of it.

Find out more about Gloucester

Gloucester Cathedral is excited to announce that it has secured development funding from the Heritage Lottery Fund (HLF) for the first phase of a major 10-year capital project. Project Pilgrim Phase One: the Heart of Gloucester aims to celebrate the cathedral’s heritage by revealing stories about

The project aims to repair and conserve the Priory buildings and landscape to create a vibrant community and learning space in the City of Gloucester.Development funding of £311,400 has also been awarded to help the Llanthony Secunda Priory Trust to progress their plans to apply for a full grant at 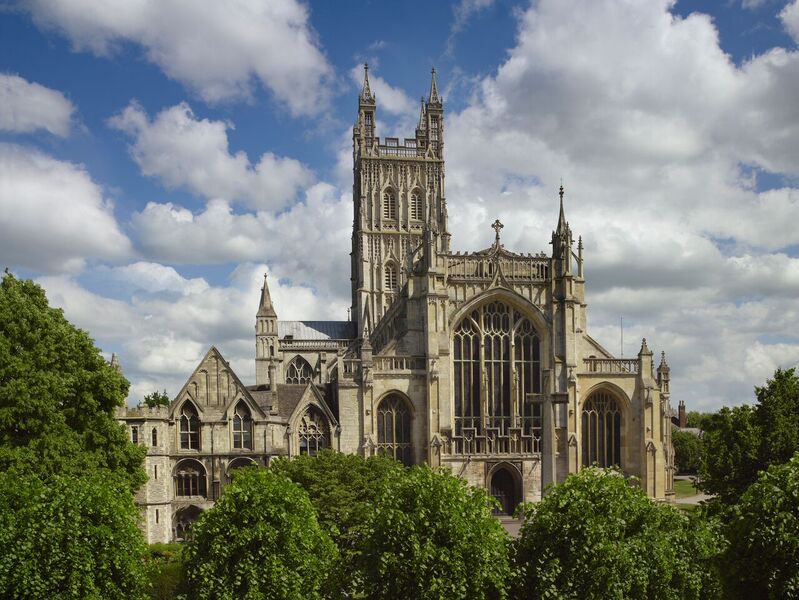