Making sense of the First World War with 14-18 NOW

Making sense of the First World War with 14-18 NOW As for so many, for me the First World War is a very personal war.

My father was born in 1894 and served at Gallipoli in 1915 and then in Palestine and Mesopotamia to the end of 1919. A disease he contracted there killed him in 1963.

But despite that profound personal link, poetry, art and drama have certainly helped me to understand the real heritage of the so-called Great War.

The power of art

Well might the Dead who struggled in the slime

Rise and deride this sepulchre of crime.

It was the words of war poets like Siegfried Sassoon and Wilfred Owen - direct, challenging, with a bleak beauty - that first awakened in me as a teenager an appreciation of poetry - and an understanding of what the First World War really meant for its participants.

Stanley Spencer in his visionary work at Sandham Memorial Chapel and John Singer Sargent in his epic painting Gassed showed me how art could so powerfully tell the truth about war.

My visit to the brilliant 2004 revival of Sherriff's Journey's End proved to me, triumphantly, the ability of theatre to bring the reality of the war to contemporary audiences.

That's why I am so pleased that HLF is able to support the First World War centenary and, specifically, the new programme of 14-18 NOW commissions.

Trying to make sense of the devastating events that took place 100 years ago fuelled much of the art, literature and culture of the time. What helped so many then can do so again today and that is precisely what the 14-18 NOW programme is doing.

And this year is an important year for the programme.

2016 sees anniversaries for some of the defining moments of the First World War: the introduction of conscription; the Battle of Jutland; and the Battle of the Somme.  There are a number of HLF projects marking these anniversaries.

So far, HLF has given over £70million to more than 1,300 First World War heritage projects - projects large and small.

One of HLF’s biggest national awards is for the restoration of HMS Caroline, the last remaining survivor of the Battle of Jutland. She will become a floating museum in Belfast.

But it’s equally important to reflect on the local impact of the war, which is why HLF supports scores of smaller heritage projects in local communities across the UK.  Many of these projects unite those same communities that felt the war's devastating  impact a century ago, bringing history to life.

[quote]"HLF has given over £70million to more than 1,300 First World War heritage projects"[/quote]

For example, the award-winning company Women and Theatre worked with members of a Birmingham community on a project focusing on the Small Heath area of the city, home of First World War Birmingham Small Arms factory.

They created a new theatre piece, a touring exhibition and a digital archive exploring the experiences of women working in factories during the First World War.

In London a recently-funded project, led by the Age Exchange Theatre Trust, will get British and German elders to meet, share and record their First World War family histories.

It will compare and contrast memories of the war passed down to children, and explore how the war affected those families. A documentary sharing the story of the project will be screened at media, heritage and community venues from July.

And there’s more to come.

In 2018 there is the centenary of the Armistice - and of votes for working men and the first votes for women.

In 2019 we should recall the concluding events of the war in the Middle East. Events that drew the maps, the lines in the sand, that still have profound implications today.

These commemoration projects – those we have already experienced, those announced today as part of the new 14-18 NOW season and those that will mark the anniversaries to come – bring communities together around our shared heritage.

But this is only possible thanks to the funding that comes from National Lottery players.

With their help the relevance and legacy of these historic events, both nationally and locally, can be better understood today and into the future.

It's thanks to National Lottery players that communities of today can confront the truth of what happened in 1916. 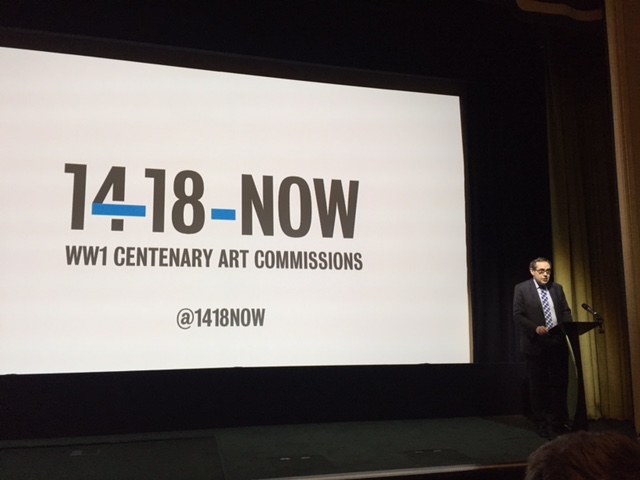