How Magna Carta still inspires us, 800 years on

As the country marks 800 years to the day since the sealing of Magna Carta at Runnymede, our Chief Executive Carole Souter reflects on how the anniversary has proven to be a "smash hit" with HLF-funded projects.

Who would have thought that a document sealed by one of our least popular Kings in a field in Surrey 800 years ago would prove to be a 2015 smash hit?

In the past few weeks I have heard the importance of Magna Carta explained by Neil MacGregor in Salisbury Cathedral; primary school children from Southwark (on the terrace of the House of Lords, no less), volunteers in Faversham, Kent, alongside a brilliant exhibition of the town’s remarkable series of medieval documents; in a video presentation at the Society of Antiquaries; by the curator of the great exhibition at the British Library, Julian Harrison; and by the Bishop of Lincoln (in the first sermon I’ve ever heard which quoted Tony Hancock!).

In Salisbury, I saw visitors from all over the world gazing at the original of a document they studied as part of their legal training – and then taking selfies with the perfect facsimile safely posted nearby: what a fantastic way of bridging 800 years!

Faversham schoolchildren were fully engaged in the preparations for the commemoration. Models were made of Runnymede, new versions of Magna Carta drafted, and a very professional-looking video of what Magna Carta meant/s to people then and now produced. I would love to introduce those young people to their colleagues in Southwark who, supported by barristers from Blackstone Chambers in London, illustrated a book explaining the importance of Magna Carta. I saw how proud their teachers and parents were of their work, and how much pride and confidence they had in what they had achieved.

They also worked with the Society of Antiquaries, of which I am a Fellow, and the Society’s own Magna Carta project has helped a scholarly body which is working hard to open its doors to a wider audience to engage with entirely new groups. The awe of the schoolchildren who were allowed to unroll an ancient document in the society’s rather grand home in Burlington House reinforced the power of ‘the real thing’ in an age when digital access can open our eyes to new ways of seeing the past.

At the British Library – the only one of these projects which HLF has not funded – the collection of founding texts is quite breathtaking. Items of fundamental importance lent, often for the first time beyond their national borders, out of respect for the  importance of this remarkable document.

And in Lincoln Cathedral, whose copy of Magna Carta is now housed in a wonderful new setting next door in Lincoln Castle (see Mary Powell’s piece about the recent opening), the gathering listened spellbound as Robert Hardy read extracts from the document itself – although there might have been a moment of alarm when he began in Latin!

Overall, HLF has so far contributed £22m to 26 projects the length and breadth of England which have seen communities large and small, formal and informal, come together to learn more about and celebrate the founding statement of our democracy. I was delighted that when I asked the invited audience of local supporters of the Lincoln Castle project how many of them were Lottery players a forest of hands went up and I was able to thank them directly for their contribution to celebrating Magna Carta. 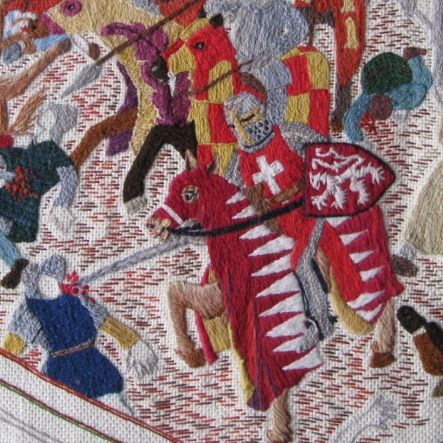 Simon de Montfort depicted in the Battle of Lewes Tapestry