How to involve young people in heritage

Engaging young people in heritage can often be a challenge. Middlesex University Professor of Journalism Kurt Barling reveals how he did it with a First World War project.

The First World War led to revolutions and the reshaping of maps which still dictate international relations today.

Yet as the memories of Empire fade from living memory, there is a danger that the narratives presented to younger Britons become distant from the realities of that conflict. Engaging younger generations in our heritage can be a challenge: the stories must be relevant to them beyond: ‘it’s important because we told you so’.

This was the plan behind our HLF-supported Hidden Heroes: Soldiers of Empire project, which brought the untold tales of soldiers from across the British Empire to the surface.

One of the original motivations was to introduce a group of Media and Film undergraduates from Middlesex University to the skills needed to explore national archives at Kew and the National Army Museum among others, and to translate what they found into stories which made sense to them. By choosing to focus on the local Middlesex Regiment, we aimed to capture the imaginations of our young researchers.

With the expert guidance of Eastside Community Heritage, finding descendants of the Soldiers of Empire, the writing of scripts for an exhibition and turning them into podcasts and eventually the Hidden Heroes film were all ambitious objectives. There have been plenty of pitfalls along the way, but we were all conscious of the importance of curating material which reflected a multi-ethnic Empire in a way that would ultimately create points of access for even younger audiences.

[quote]“We were all conscious of the importance of curating material which reflected a multi-ethnic Empire in a way that would ultimately create points of access for even younger audiences.”[/quote]

The primary target of our exhibition was our museum partner, the Bruce Castle Museum in Tottenham, North London. It remains at the heart of what were the recruiting districts for the Middlesex from 1915 onwards, including the now famous Tottenham Hotspur footballer Walter Tull.

It was important to ensure children from a range of communities could access the First World War narratives by identifying with the stories we chose. In the end we focused on soldiers who came from the Caribbean, Ceylon (Sri Lanka), India and Japan. The stories we uncovered varied from Sam Manning who became an entertainer, to Kamal Chunchie who set up the Coloured Men's Institute in East London, to AA Rudra who went on to serve in the Indian Army.

These men’s stories, the students and now visitors soon discovered, are not one-dimensional and reflect modern Britain’s own transition from Imperial power to a diverse island nation.

We created a static exhibition which has been on display for six months. We also created the Soldiers from the Empire website to complement the work that teachers might want to do with students, including useful teacher tips as well as the podcasts and short videos.

It soon became clear though, that while many primary schools would make it to Bruce Castle, it has become difficult to get secondary school students off school premises because of an increasingly crowded curriculum.

We decided to try and seek extra funding from the Arts and Humanities Research Council to turn our material into a robust pop-up exhibition. This has now been on a roadshow around secondary schools in North London since January 2016. The language of the travelling exhibit needed to be adapted to suit the older students but by far the biggest challenge was to give schools enough time to prepare the students for the arrival of the exhibit.

One school, Enfield Grammar, not only delivered activities to inspire its own students, including a teacher dressing as a Tommy for a week, but invited six local primary schools into workshops prepared and delivered with the help of the Grammar boys. Local MP Joan Ryan described the atmosphere as “absolutely brilliant”. Some of the resulting artwork has been transformed into a 10-metre tapestry. No-one could have predicted such flights of imagination when we began this journey.

We are in the early days of our own learning on how to create significant impact with this type of pop-up exhibition and develop this educational relationship between university and local secondary and primary schools. There has been considerable enthusiasm from schools to use the exhibit, without sometimes realising how much extra work needs to be done to make it relevant to their students by engaging with the website and exhibit in a synchronised way.

As a university it is important that the fruits of our own research can be shared backwards along the educational pipeline. If the target is to get nearly half the children of school age onto a university education we need as a community to show why what we do matters to that audience. We will endeavour to understand what is working well and not so well for the students with an online survey and will present some results later this year.

While you can please a lot of the visitors, some simply aren’t interested and this is a perennial problem of learning. However since October approximately 10,000 children have viewed the static and travelling exhibitions. We intend to keep the schools roadshow going for as much of 2016 as we can.

Getting involved in heritage: the student’s view

Lauren Sears took part in the Hidden Heroes project as part of her degree. She explains how it has helped her build her own career. Students carry out research at the National Army Museum Students at Gladesmore Community School look at the exhibition 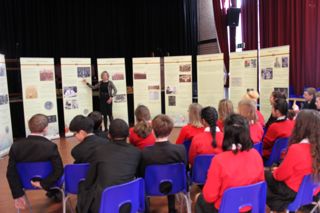