Known for their crushing riffs and colourful frontman Ozzy Osbourne, Black Sabbath are widely considered the founders of heavy metal. But while the Birmingham band invented the music, it is the fans that created the genre.

This autumn, Birmingham organisation Capsule will celebrate the unique musical heritage created by the heavy metal pioneers in an HLF-supported project that will explore their relationship with their fans.

Capsule is amassing an incredible digital archive of material with contributions from fans around the world. Do you have a 1970’s Black Sabbath ticket stored away, or an old Judas Priest t-shirt at the back of the wardrobe? Let us know and help us explore the archive for a fascinating social history across four decades.

Home of Metal are also looking for a dedicated team of volunteers to support the upcoming project running from now until March 2017. There will be lots of exciting opportunities to build your skills and help make metal history.

At first glance, metallers might not be the obvious focus of an HLF-supported project. Yet we think this music – birthed in the unique industrial landscape of Birmingham and the Black Country – is a significant part of British heritage.

[quote]“At the age of 17, Black Sabbath lead guitarist Tony Iommi lost the tips of two fingers on his right hand in an industrial accident on his last day of work in a sheet metal factory.”[/quote]

Nothing demonstrates this like the story of how Black Sabbath found their unique sound. At the age of 17, lead guitarist Tony Iommi lost the tips of two fingers on his right hand in an industrial accident on his last day of work in a sheet metal factory.

After the accident Iommi considered abandoning the guitar until his factory foreman played him a recording of famous jazz guitarist Django Reinhardt, which encouraged him to continue.

He fitted homemade thimbles made from melted plastic bottles to his injured fingers and used loose strings which created Black Sabbath's "bigger, heavier sound" and a whole new genre.

Home of Metal is our celebration of heavy metal and its heritage. In 2011 Capsule curated and produced an ambitious season of activity which included a series of exhibitions and events, a film tour and conference spread across 15 venues across Birmingham and the Black Country.

At Birmingham Museum and Art Gallery, Capsule worked alongside world-renowned design team Studio Myerscough to transform the Gas Hall into the major exhibition: Home of Metal: 40 Years of Heavy Metal and its Unique Birthplace.

Featuring key pieces from music history, the exhibition explored the social history of the region, from its metal-bashing industries to the post-war home life of working-class families.

These connections with the genre resonated with older audiences, many of whom remember a time when the sky over the region was thick with industrial smog. At Wolverhampton Art Gallery, paintings by 19th-century Black Country painter Edwin Butler Bayliss showed hellish scenes of foundries and factories, choked with smoke and fire.

At Walsall Leather Museum we saw how the area's traditional leather-working industry influenced the heavy metal uniform of shining leather, metal and chains.

Home of Metal attracted over 200,000 people to venues; 35% of those visitors to the exhibition were visiting venues for the first time. The season had an economic impact of £2.69million, and reached a PR value of £1m which demonstrates the significant value of the region’s musical heritage, and its international impact and resonance.

[quote]“Home of Metal attracted over 200,000 people to venues; 35% of those visitors to the exhibition were visiting venues for the first time.”[/quote]

This next phase of the project, generously supported by HLF, is inspired by Black Sabbath’s final world tour in 2016/17. We will explore how the music of four working-class lads from Aston has captured the hearts and minds of fans globally.

The project will work with fans, volunteers and the community to harness the power of social media, take fan portraits and capture and collate stories that mark this unique moment in history.

The content collated will be used to develop an active online community and a future exhibition.

Find out more on the Home of Metal website. 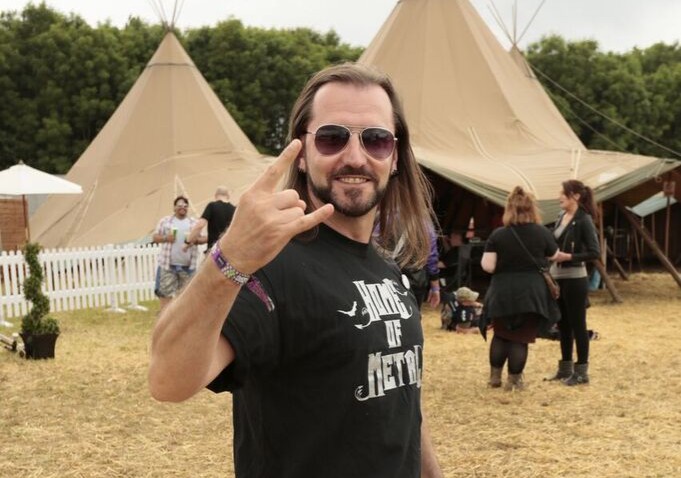 A fan gets ready to rock